This basement in Elmer, NJ, has an electrical panel that is in charge of the power that is sent throughout their banking systems. Although it was not necessary, a piece of plywood was painted black and placed to hold the weight of the electrical panel. There was also a pipe where wires had been run from the ground through the wall. The electrical wires were encased in the pipe to prevent moisture from the conduit/ electrical line, preventing shorts in the wires. However, the ground began to settle and caused the pipe to drop a quarter of an inch in the outside dirt, which formed a gap around the original pipe entry through the walls cinderblock. This allowed water to start leaking from the cinderblock wall around the pipe. Thanks to our WaterGuard waterproofing system at the floor wall joint, most of the water went into our system. In spite of that system doing its job, there was still water that went into the gap from the pipe and saturated the wood panel and weakened the integrity of the wall. Not only would this compromise the electrical units of the wall, which ran the operation center, but could also cause communication problems with all of the branches on the bank itself.

A pipe penetration fix was done to scrub out and wash-out any dirt or sediment that had come around the pipe to make sure the Epoxy sticks to the cinderblock wall and the pipe itself. The pipe entry was also cleaned to remove any previous resin or leftover caulking left by the builder. The two-part epoxy will "follow" any leakage points down the wall to the waterproofing system, making sure water will not penetrate in the cinderblock wall again. Pipe penetration repair includes a separate thinner "Cleanspace Wall-like" product that is called Pinky, which is cut to fit around the pipe in a large radius and a construction-grade flexible adhesive is used to attach it to the block. A similar adhesive product was also left before the electrical panel was placed back into the wall by the electrician, Krise Electric. This ensured no moisture escapes, ever. 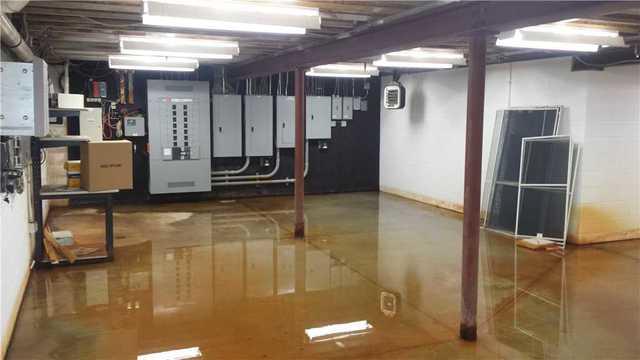 Not only did the basement have water, but the black plywood in the background was also soaked with moisture. 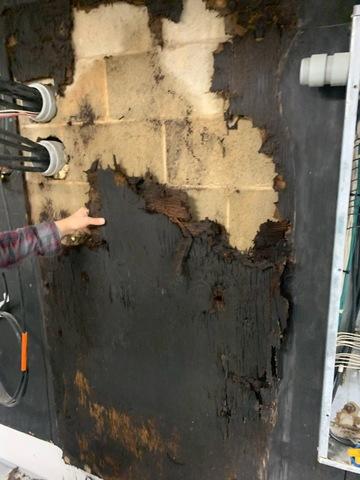 When the plywood was being removed, it showed how much water had been absorbed into it. 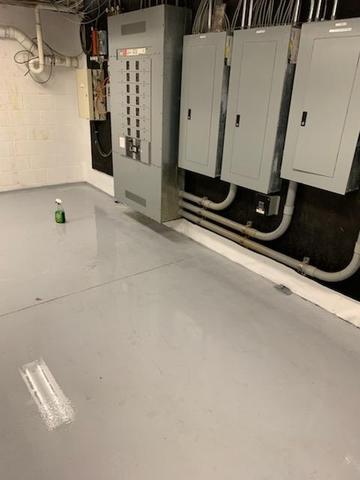 This photo was taken after the original Cleanspace Wall was placed in before the whole panel system was removed. 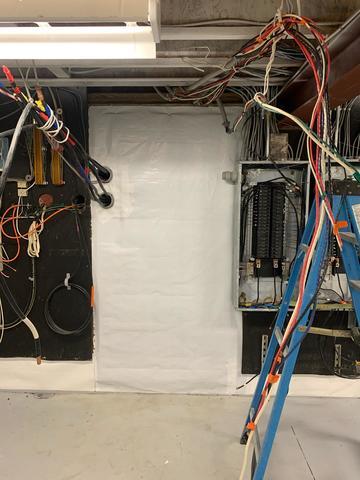 Drainage matting is a product behind the white product, Cleanspace Wall, which is the square on the wall.

Back to Previous Page
Back to Case Studies