WE ARE HIRING! Follow the link to find out more.

Waterproofing + Encapsulation Testimonial | Joanne W. lives in an old home with a dungeon-like basement and a crawl space that was added in later. In the past, both places were hard to work in and even frightening to enter. They were also musty and dirty, and accumulated water during storms. Thanks to the Dry Guys Team, Joanne no longer has to deal with this issue!

"Hi my name is Joanne Wright. I'm from Salem County New Jersey. My original problem was that I'm in an old house. The house is
about 160-70 years old, so it's an old basement- gets wet, old bricks, old stone mortar and actually the people that I've had coming in to do work we're afraid of the crawl space so I have, so they never went in there. So who knows what was going on in there, but anyway it was wet, it was moist, there was moisture coming in and I knew I needed to have some help with that so I
called Dry Guys."

"I heard about dry guys by looking at a phone book but also doing
some research and learning that they were well respected in the area and I actually had had them do some work for me several years ago putting in some windows in the basement because some windows were out or just needed replacement and they had actually given me some advice about my basement at that time I just wasn't ready to do anything, so I knew of them."

"I chose Dry Guys because I really like the service I had the first time I used them with the windows and I knew they had great reputation and knew what they were doing so I just called them. I didn't call anybody else. My experience with Dan Gattuso was excellent, everything was done timely, it was done professionally, I had no complaints. They were kind of out of my way and just did what they needed to do so it was perfect."

"My experience with the office staff was fine, I mean they set the appointments, they you know told me when I could expect the work to be done and how long's going to take and that's what happened."

"The dehumidifier has worked great, it's dried out things in the basement because it was very moist, it's just a moist basement, being old and with the bricks and the stone so the products have worked really well. I was impressed with Dry Guys because they did what they said they were gonna do and they did it in the time actually I think they ended maybe a day or half a day earlier, so they were very prompt and they were very specific about how long it was going to take so I could plan my life around it and that was great and the products worked really well."

CleanSpace forms a vapor barrier in the crawl space and insulates it.

The SaniDry pulls moisture out of the air, preventing mold growth.

Back to Previous Page
Back to Videos 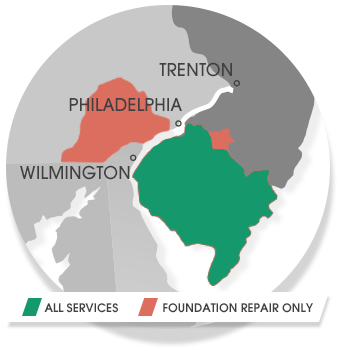