Ian hails from Monroeville, NJ. Raised working on a dairy farm, he’s no stranger to hard work! In addition to his prowess with a cement trough, he has a certification in architectural studies. He doesn’t mind the crawl spaces or the foundation repair installs, but really enjoys the basement waterproofing aspect of the job, showing off a bit in his cement laying skills.

When asked what he likes most about his job, Ian commented, “The people I get to work with are the best, but mostly, knowing I had the opportunity to help a homeowner and do a great job for them. It’s what makes each day.”

In his spare time, Ian is a bit of an adrenaline junkie. He loves all sports, but Motorcross is where his heart lies. “It’s the going fast, and the going fast while jumping a bike that gets me!”.   It wasn’t always sunshine and rainbows, he’s been hurt a few times. Being clotheslined by a tree is just one example, but there have also been some highs- like acquiring 2nd place during Thunder in The Sand Motorcross Rally, held in Wildwood, NJ.

When Ian is in your home, you’re in good hands!

Watch My Video
Customer Reviews
About Me
View all Reviews

“I've been a Dry Guys customer for over 10 Years and my experience has always been great!”

“Just wanted to let you know that your company did a great job. The two guys that did the work were so nice and very professional. Thanks for the good work!”

“We went with Dry Guys over any other company due to their pricing and their references.”

“I called in to make sure our guys know how great of a job they did.”

“The truck was very organized and the crew was very efficient, leaving in AM. Kelly's leadership”

“Thank you for a great job. I will recommend you guys to everyone that I know who needs your services.”

“On the day of installation, the crew called ahead to prepare me for their arrival and still got to my house earlier than expected.Jesse gave me the game plan...”

“Thank you again for the great job!”

“I would recommend Dry Guys to my friends and family if they needed any basement work completed.”

“On behalf of my wife and I, we want to make sure you and the Dry Guy staff understand how grateful we are for the unbelievable response to our desperate call...”

Videos from projects I was involved with: 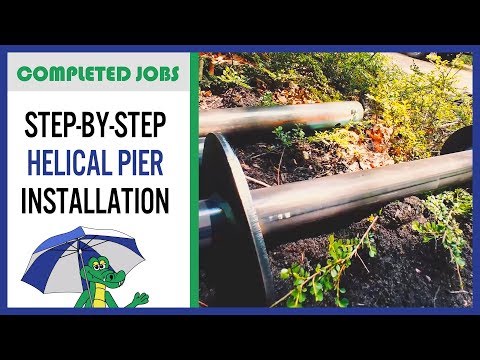 Completed Job by Dry Guys | What are Helical Piers? How are they installed? When should they be used? Follow... Watch Video »

Fixing up a Basement in Clementon, NJ

Water And Odor Problems At The Abbey In Cape May...

Bridgeton, NJ Basement Wall Restoration in...more »
Elmer, NJ Waterproofing the Basement of...more »
Millville, NJ This Home Was Saved From...more »
Upper Darby, PA Lifting a Home in Upper...more »
Before and after photos from jobs I've worked on:
Back to Previous Page Back to Meet The Team