Why Service Your Sump Pump?

Why should you have your sump pump serviced yearly? We installed the pumps in this video in 2007. The homeowner opted not to have them serviced. As a result, they had to be replaced due to a buildup of iron ochre. This cost the homeowner a lot of money - all for something that could have been prevented.

We do not have service on your installs mandatory, but we recommend them as a proactive option to preventing issues such as these instead of reactive issues like clogging, as shown in this video.

The iron ochre caused the pumps to fail and the drain outlets to clog. That’s why the new pumps, once installed, were having a hard time keeping up with the amount of water coming in. It took over eight days for the water to go down after the problem was fixed. We could have kept it clean so that it never got clogged if the homeowner has chosen to take advantage of our Annual Service Maintenance Plan.

To make matters worse, because of everything being clogged, water started to backup. This formed mud, and the mud further clogged the system, preventing the water from getting to the sump pump to be pumped out of the basement.

All of this could have been avoided with proper maintenance. This is exactly why we recommend regularly servicing your pump!

Watch the video on our sump pump page and read more about why Dry Guys Basement Systems recommends a sump pump service.

Kim Gattuso is the co-owner of Dry Guys Basement Systems in Woodstown, NJ. 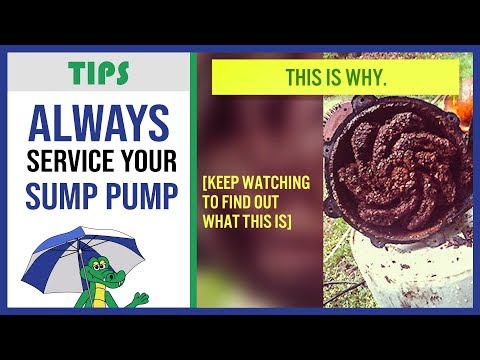 🐊Sump Pump Maintenance - Why Should I...
👉SUBSCRIBE if you like this video and want more information!👈 Here is a TIP to make sure your sump... Watch Video
Back to Previous Page
Back to News & Events